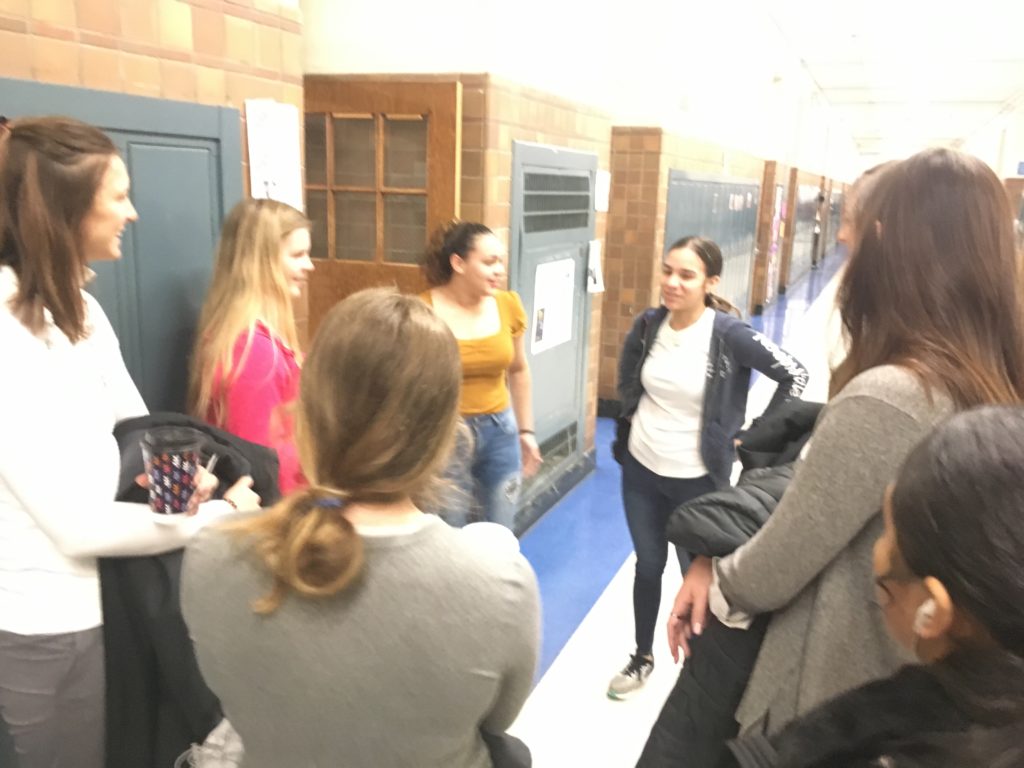 Mariely (yellow blouse) and Ambar (right of Mariely) welcome members of the Brown University Volleyball team outside the Life Skills classroom prior to the start of today’s class.

After welcoming members of the Brown University softball team outside the classroom, Faith Souza escorts the team into the Life Skills classroom and then introduces each member to her classmates prior to the start of today’s class. 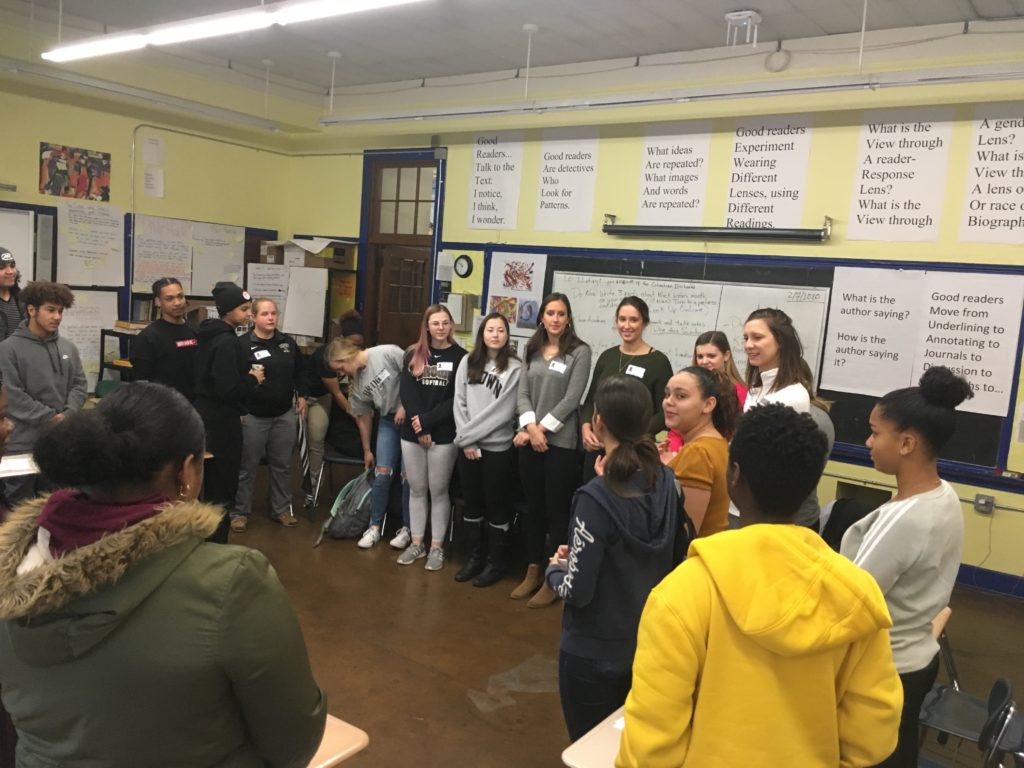 Mariely likewise introduces members of the Brown University volleyball team to her classmates. 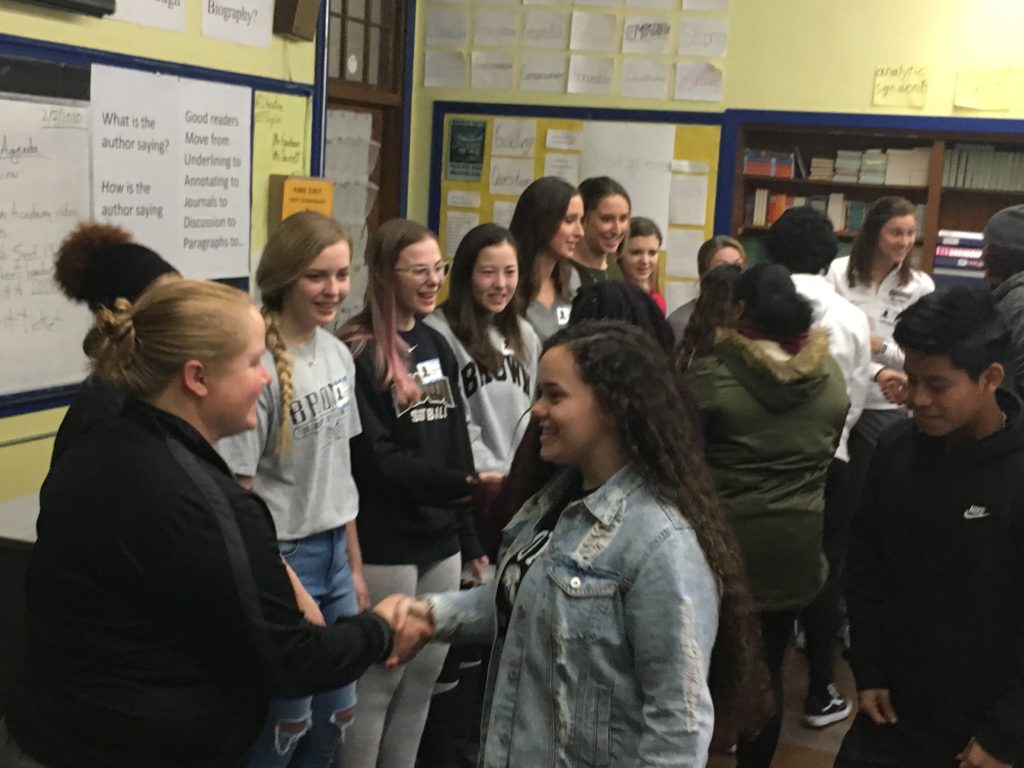 Following Faith, Mariely, and Ambar’s introductions, each member of the Life Skills class introduces themselves to the Brown University women athletes and coaches and then welcomes them to their class.  Katelyn Taverez is shown above welcoming Head Softball coach, Kate Refsnyder, to the Hope Life Skills class as Nehemias Rojas follows Katelyn to do the same. 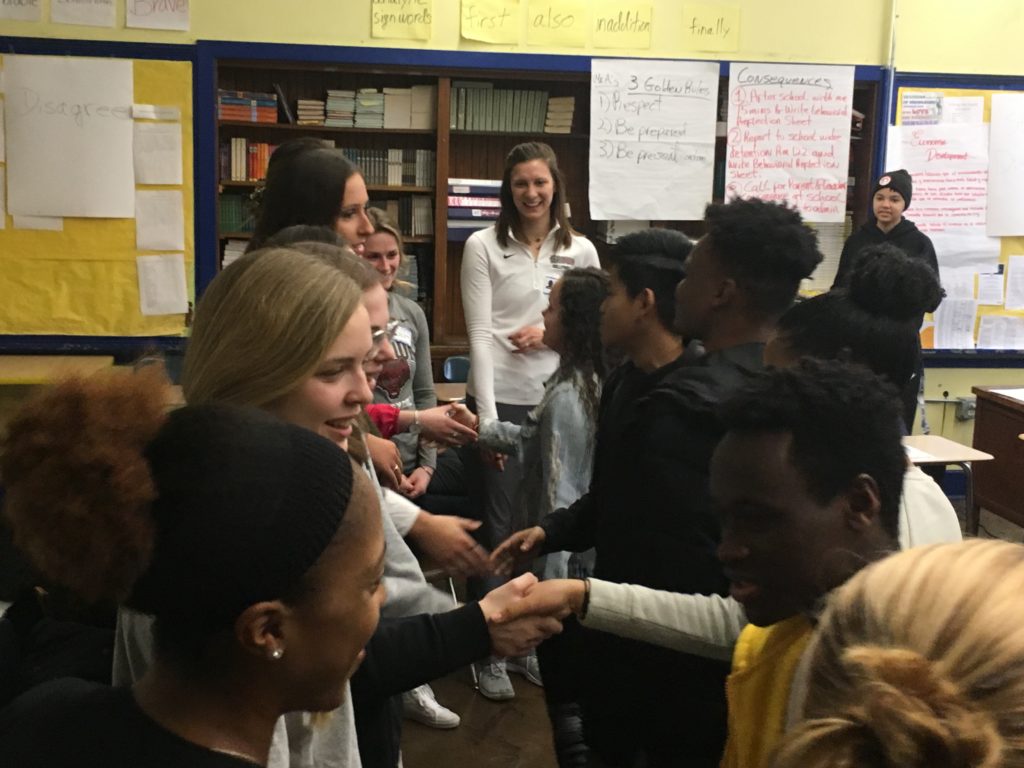 Innocent Byiringiro extends a warm welcome to Assistant Softball Coach Karavin Dew before proceeding to introduce himself and welcome other Brown University student athletes and coaches to his class. 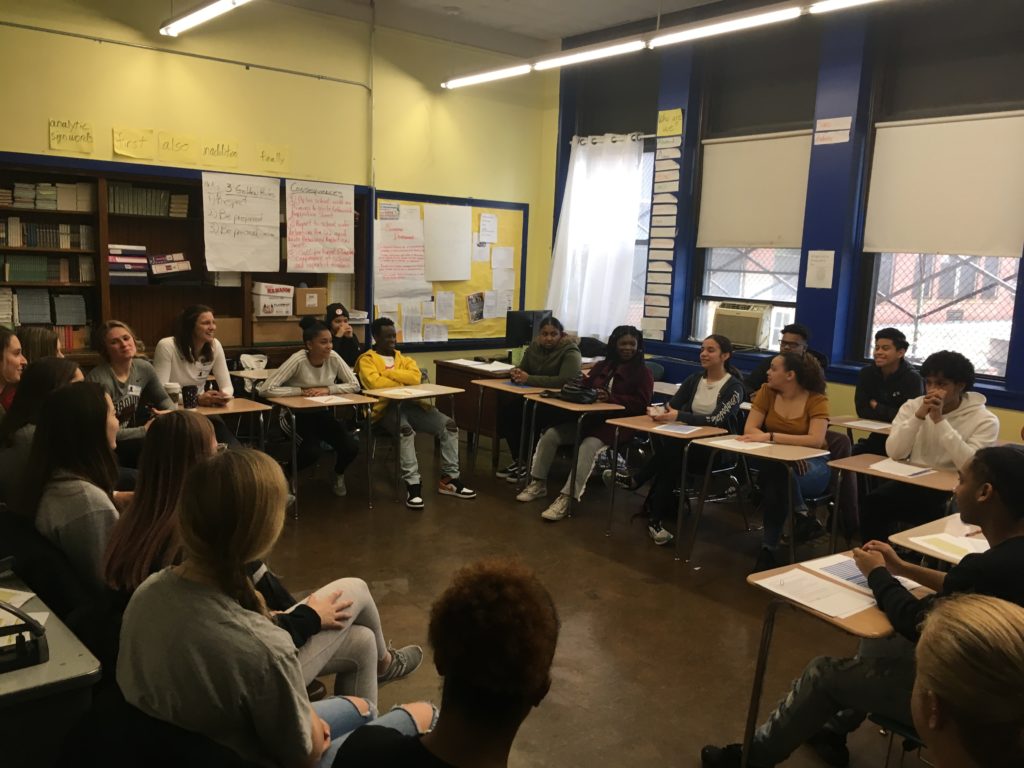 Following the introductions and greetings, the Brown University student athletes and coaches begin to share their personal stories and perspectives about being a ‘student athlete‘ as well as their transition from their homes in Texas, California, Florida, and Ohio to the Brown University campus in Providence, Rhode Island.  The photo above shows the Brown athletes responding to Ambar’s question about balancing the rigors of athletics and academics while finding a little time for leisure and fun. TIME MANAGEMENT became an important topic of conversation as well as how best to manage the occasional stress that comes along with being a student in college.    “Exercise” according to softball second baseman, Kaitlin Okimoto.  Kaitlin spoke about the data behind the benefits of exercise and how running has helped her manage stressful times during the year.

Coaches Kate Refsnyder, Karavin Dew, Katie Reifert and Eryn Riley each spoke about qualities they looked for beyond the obvious athletic talents when recruiting student athletes.   “Resilience and grit” according to Coach Katie Reifert. “Everyone experiences failure and setbacks in life.  I look to see how student athletes handle challenges in their lives.  Do they take advantage of the lessons of failure to become wiser, stronger people?”   According to Coach Kate Refsnyder, “team chemistry” is a critical issue when recruiting athletes to the softball team.  “Our team looks for people who can get along with others and place the team’s goals before personal glory.  Put the team first.“ 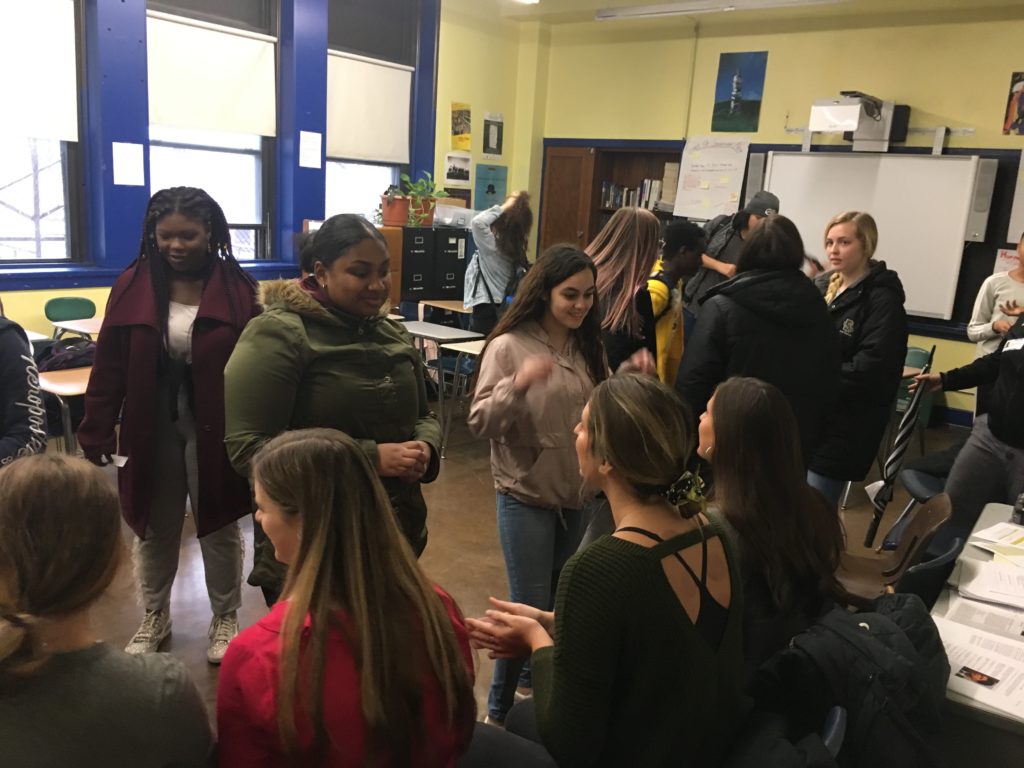 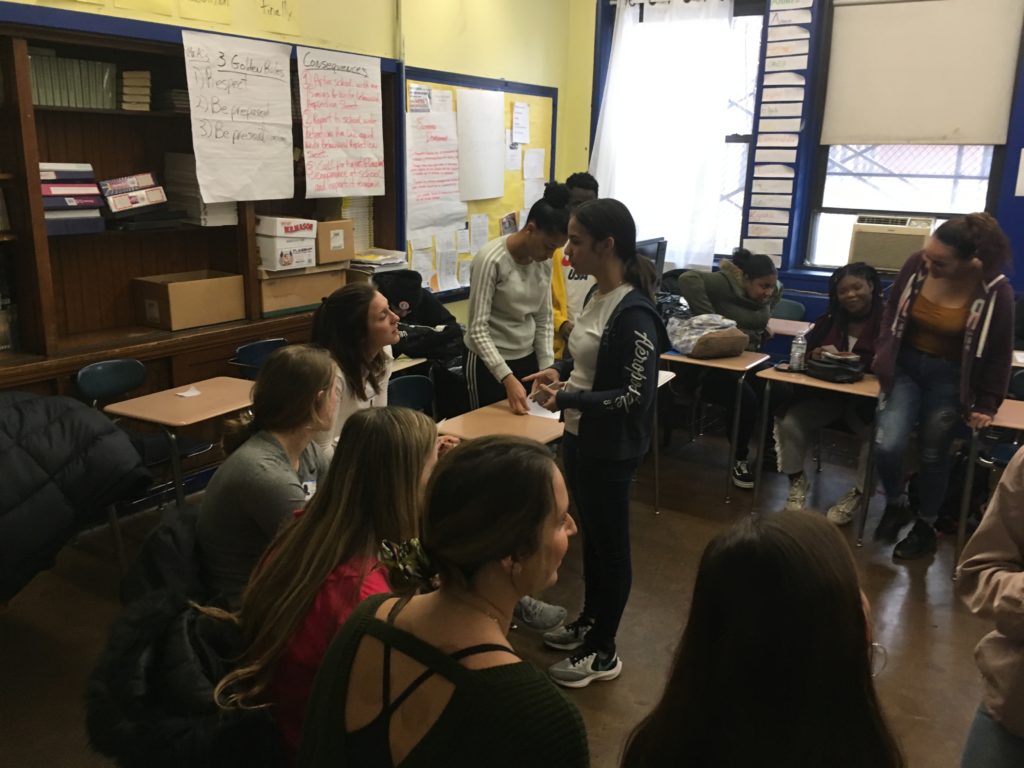 THE IMPORTANCE and BENEFIT of a respectful ‘ASK’.   Ambar REPECTFULLY asks Coach Katie Reifert the possibility of she, Mariely, and a few her teammates from the Hope High Women’s volleyball team visiting a Brown University Women’s volleyball team practice and/or game.   Coach Katie said she’d check with the Brown University Athletic Director and get back to Ambar with a response.  Good job, Ambar!!! 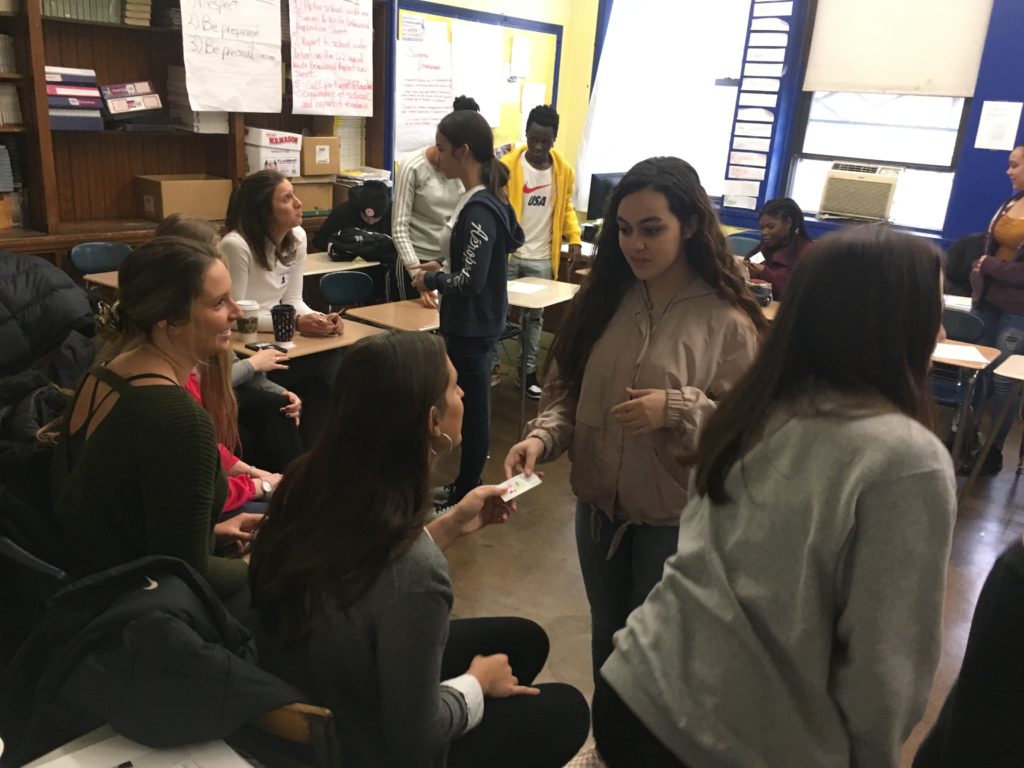 Jarlene Corona offers her business card to Camberly Mariconi during the networking portion of today’s class.   Jarlene has an interest in becoming a doctor and when Camberly told the class she was a pre-med major, Jarlene understood the value of adding Camberly to her network.  Good job, Jarlene. 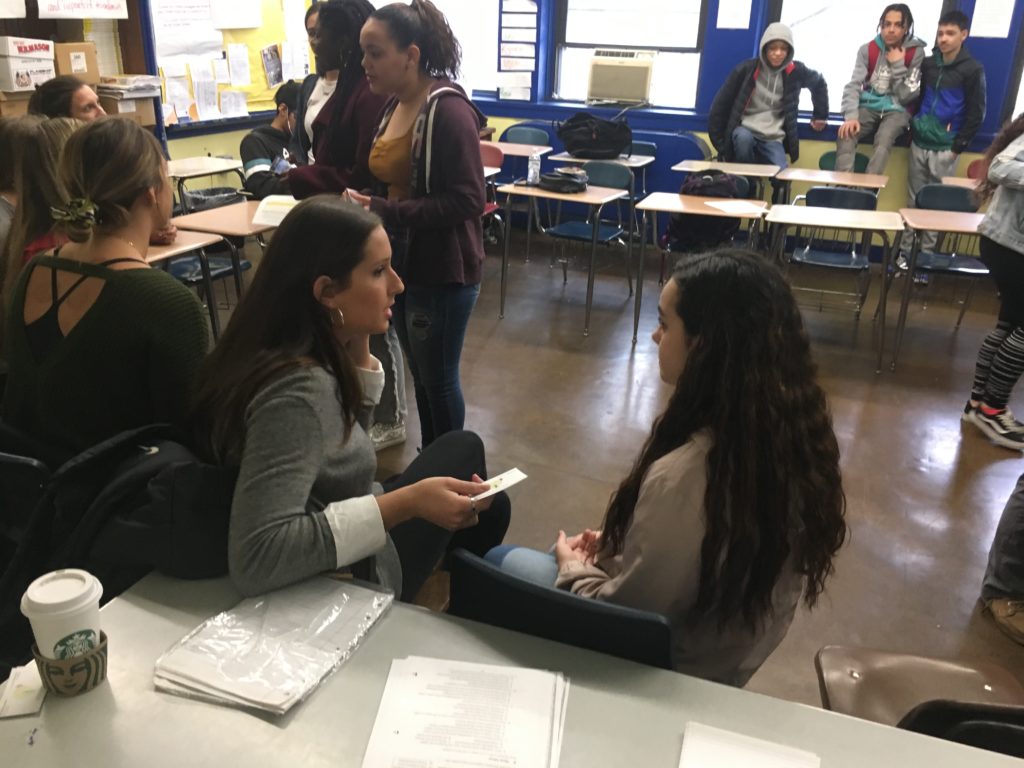 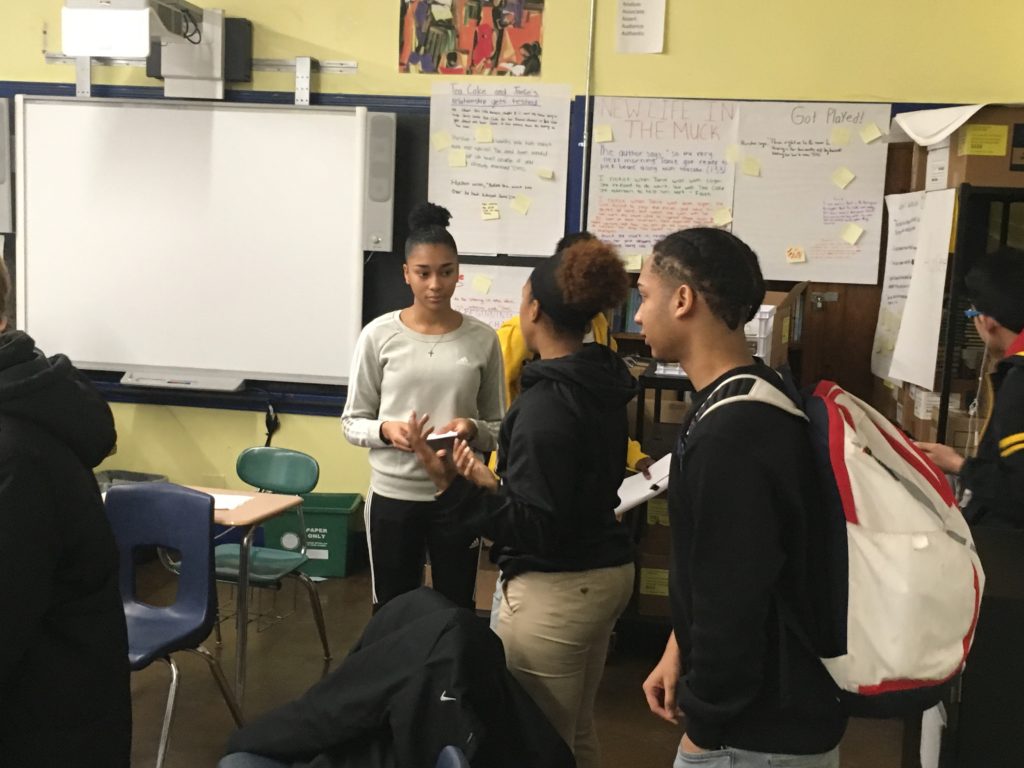