1.  This goal of this homework assignment is for you to use your IMAGINATION.  After listening to Catalina Martinez and Nikolai Pawlenko’s career stories at NOAA exploring the world’s oceans today, please imagine yourself accompanying them on a deep dive of one of the world’s deepest ocean floors.  Please share with me something ‘amazing’ or ‘surprising’ you encountered during your ocean exploration with Catalina and Nikolai.  Then, describe what you saw;  use adjectives to describe the color, size and shape of whatever amazed you at the deepest part of your dive to the ocean floor.   Send the story of your amazing discovery at the bottom of one of the earth’s oceans to my email address by Sunday evening, November 25th.  Please identify what ocean you were exploring when you encountered this amazing site.  Your story must be well written with perfect spelling, good grammar and punctuation, and short sentences.   Here are some interesting photos and a video from other explorations of the world’s ocean floors to help you liberate the imagination you have within you.

One of the highlights of a research robot dive was the encounter with a dumbo octopus at it uses his ear-like fins to slowly swim away – this coiled leg body posture has never been observed before in this species. 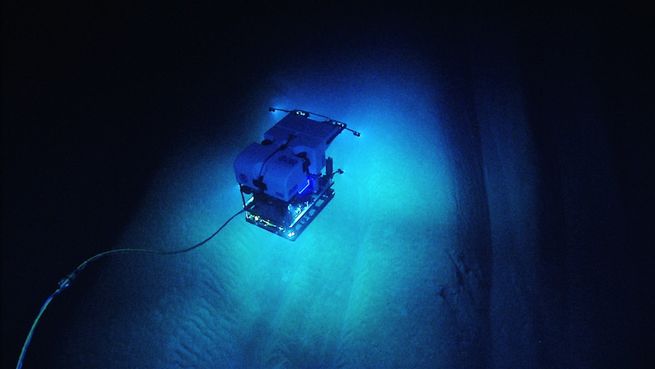 ROV Deep Discoverer explores the interesting geomorphology of Bryant Canyon in the Gulf of Mexico.  This photo is from the NOAA Okeanos Explorer Program on a 2014 Expedition 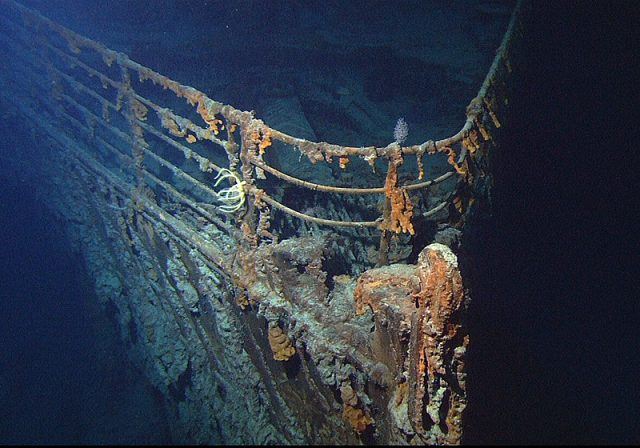 More than two miles down, the site of the bow of the great ship, Titanic, emerged from the darkness on a dive by explorer and filmmaker James Cameron in 2001.  A number of expeditions were previously launched to find Titanic, which sank in 1912, but wasn’t found until September 1st, 1985, during an expedition led by Robert Ballard.  Robert Duane Ballard is a retired United States Navy officer and a professor of oceanography at the University of Rhode Island who is famous for his work in underwater archaeology: maritime archaeology and archaeology of shipwrecks. He is best known for the discovery the RMS Titanic in 1985.  Catalina mentioned Mr Ballard during today’s class.  The RMS Titanic was a British passenger liner or cruise ship that sank in the North Atlantic Ocean in the early hours of April 15th, 1912, after colliding with an iceberg during her first voyage leaving from Southampton England to New York City. There were an estimated 2,224 passengers and crew aboard, and more than 1,500 died, making it one of the deadliest commercial peacetime maritime disasters in modern history. RMS Titanic was the largest ship afloat at the time. The ship might have survived a head-on collision with an iceberg, but a sideswipe across her starboard side pierced too many of her watertight compartments.