to share their life stories and aspirations, many of which, were strikingly similar to the some of the students in Hope’s ‘Life Skills’ class.

Michelle shared her journey as a 14 year old girl from Viet Nam who moved with her adoptive parents to a tough section in the city of Philadelphia and soon after onto the beautiful campus of Penn State University to create opportunities for her eventual successful career at some of the top companies in America.  Michelle spoke about her commitment to hard work and her insatiable quest for education, of persevering in the face of personal adversity and family challenges while building a network of successful, honest, intelligent, empathetic and curious individuals.

Cassandra spoke eloquently about her life growing up with her hard working, single mother, moving to new homes in several American cities as a child all the while dealing with the challenges of fitting in to a new school in a new community.  Cassandra spoke so optimistically of looking at each move not only with the obvious assimilation challenges but as an opportunity to meet and befriend new, good people to add to her growing network.  Cassandra’s energy and positive attitude became a source of inspiration as she shared her story and spoke to students during the networking period at the end of the class. 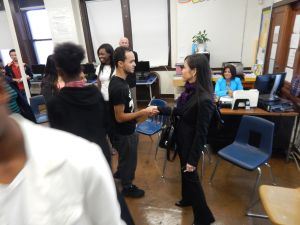 Carlos began his story about one of his role models, his father.    Carlos’s dad was a Cuban immigrant, working at Burger King all the while taking classes to get his high school degree.   His father’s commitment to education led to a scholarship at one of New England’s top business schools, Babson College, majoring in Finance.   His dad’s return on his commitment to hard work and education was eventually as the Chief Financial Officer at one of America’s top accounting firms, Arthur Anderson.   Carlos’s also shared his own story of career risk taking and change and the same commitment to hard work and education as his dad.   Carlos’s professional career surprisingly started in sports broadcasting as an on-air radio sports reporter at a local radio station.  After changing careers and learning new skills with new companies along the way, Carlos eventually joined CVS and has been asked to assume a number of different responsibilities using his leadership, collaboration and creative skills. 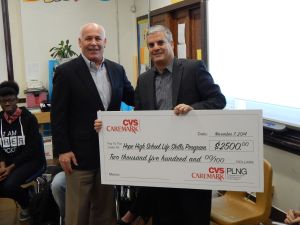 yees can expect from their company –  a challenging, well paying job in a beautiful, safe environment with excellent health benefits and an opportunity to be promoted to higher paying, more challenging positions.   They also spoke of CVS’s focus on hiring a diverse work force to better serve all their customers throughout the United States, Puerto Rico, Brazil and soon in Asian countries.  Carlos, Michelle and Cassandra finished the day by making a donation to sponsor a student to the National Youth Leadership Conference (nylf.org) in Washington, D.C.    Our Hope High ‘Life Skills’ program raised enough money  to send 5 students to the Conference last year.