Today’s guest was Richard Lewis, the Director of Sales & Marketing

of Flow and a senior at Syracuse University majoring in Entrepreneurship and Business Management. 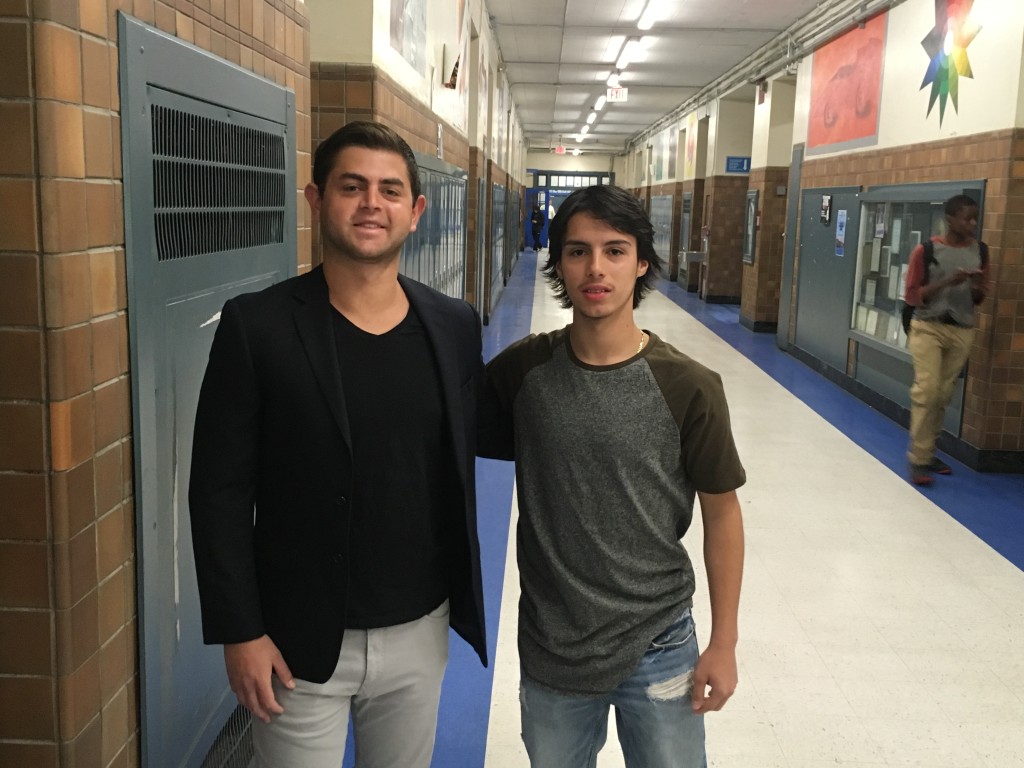 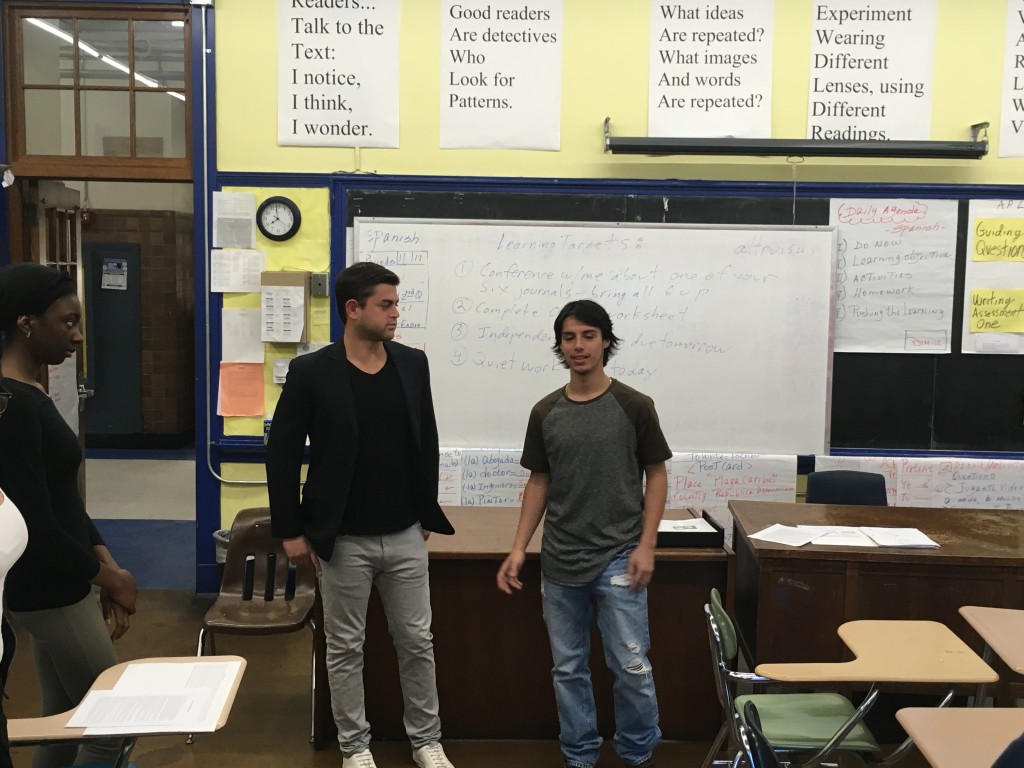 Gerardo introduces Richard to his Hope Life Skills classmates at the beginning of the class. 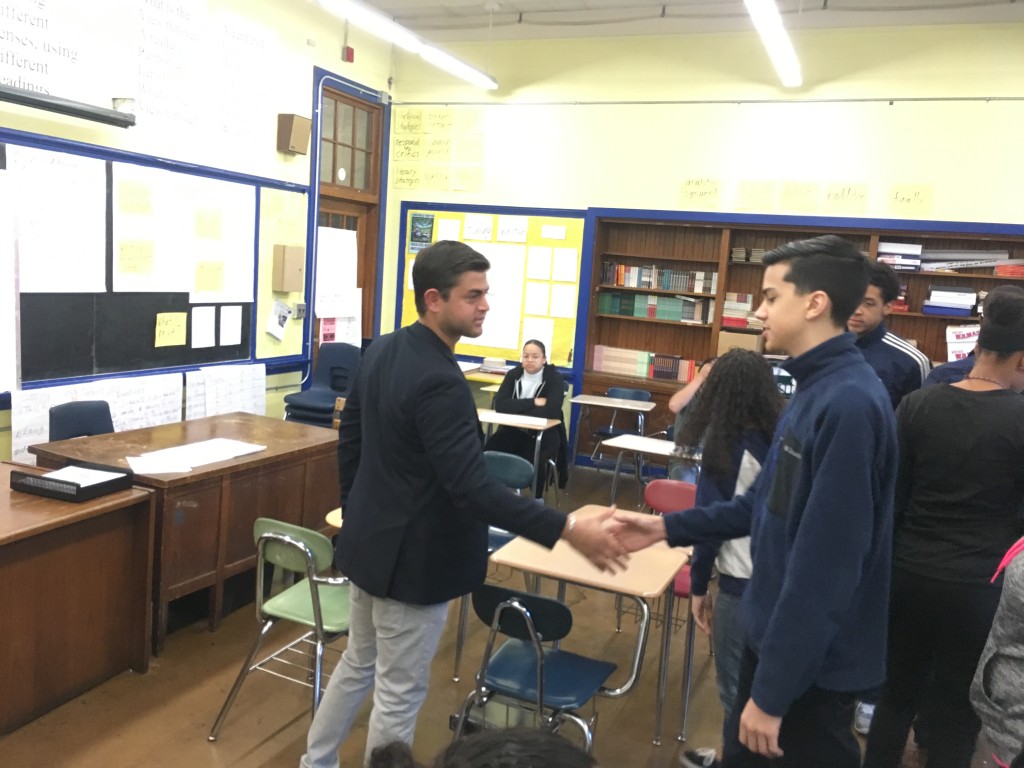 The class accepted the challenge of imagining we were in

as freshen students, sitting with Syracuse senior, Richard Lewis. The conversation began with Syracuse University freshman, Stephen Cronin, asking if he could sit down and speak with upper classman, Richard.  Soon after, Stephen asked Richard if he could bring two of his freshman friends, Mohamadou Mbaye and Aimon Foreman, into the conversation.  Richard said “of course“.  Soon after, Kyra Ferrage joined the group.  And then, freshman Sara Jackson came to the table asking if she could join the conversation.   Here’s what unfolded.

“I have focused on building a network of successful people. 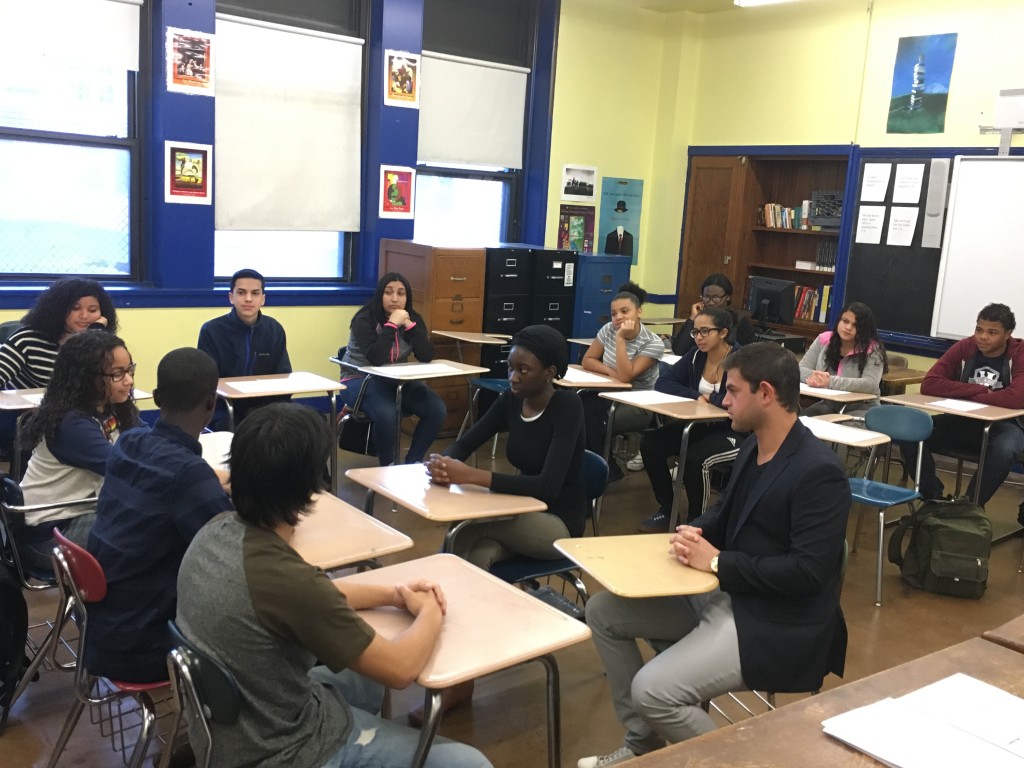 Syracuse students sharing ideas at one of the dining tables at the school cafeteria. At this moment in time, Kyra (across the table from Richard at the end of the table across from Aimon)  asks Richard a question.

I’m always introducing myself to different people.  In the process,

I’ve created a network that helps me think differently.

My network enables me to think creatively and confidently.  I bounce ideas off the people in my network.  Some of the companies I start succeed; others fail.  For those that failed, I learn valuable lessons and moved on to the next opportunity”  Richard said.

“I’m am entrepreneur; I am always looking for opportunities.

And, opportunities are all over the place.  At Syracuse university, I created a business offering coupons to Syracuse students to shop at stores along a street in Syracuse like Thayer Street in Providence near the Brown University campus.  The coupons created business opportunities for companies near campus as well as giving discounts to students who went to shop at these business.  And, I made money too!  Everyone benefited”.

Richard also spoke about storytelling.  “I traveled to Syracuse University and asked for an interview at the Admissions office.  My high school grades weren’t the best but I told them what contributions I would bring to the campus if they admitted me. I tried to be sincere, humble and respectful.  And, I asked to be accepted.

I asked!  And Syracuse University accepted me! ”

Richard then shared his story of a networking opportunity in New York.  “I went to this event and saw a distinguished man I thought I knew but couldn’t remember where I saw him.  I wanted to meet him.  So, I walked up to him and introduced myself.  He said his name was ‘Jamie’. I started to tell him about my business experiences.  He then started to tell me about himself.  ‘My name is Jamie Dimon.  I’m the President of J.P.Morgan, the Wall Street investment company.’

I couldn’t believe it!  I’m talking to Jamie Dimon, one of the most influential people in the world,

the President of the largest bank in the United States and the world’s seventh largest by total worth! 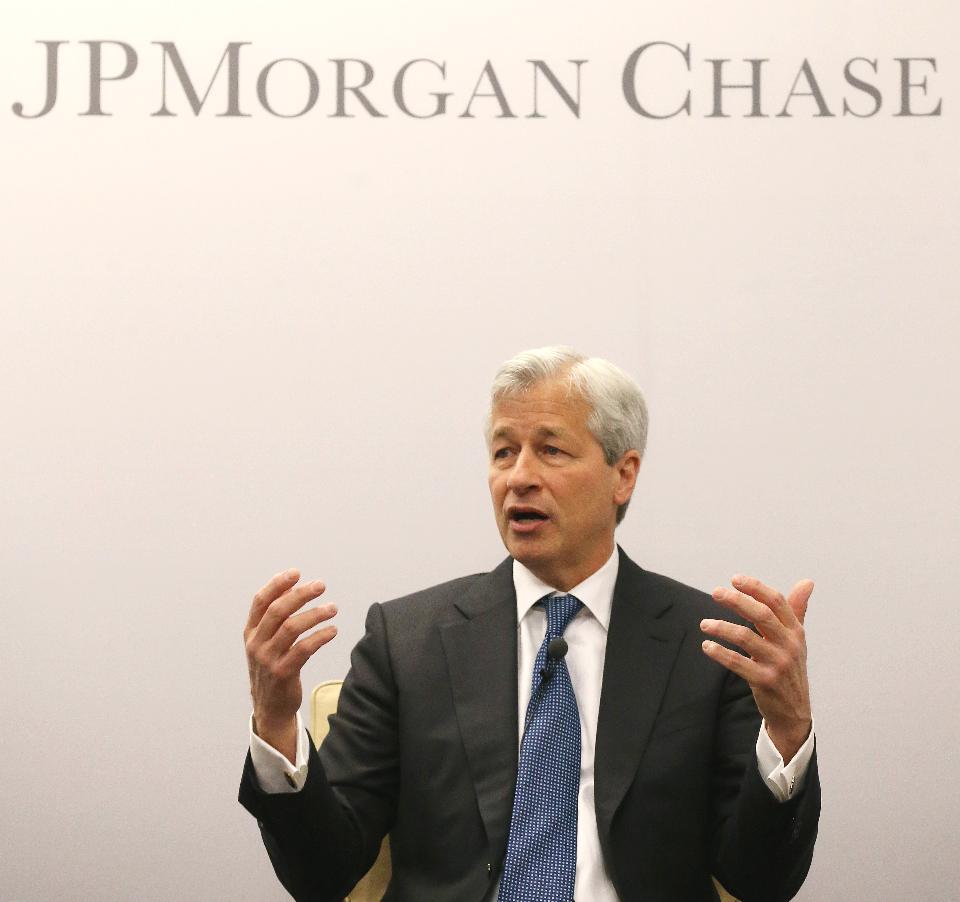 The value of J.P.Morgan is $2.35 trillion!!    Trillion!  J.P Morgan is essentially the world’s most valuable bank!   At the end of our conversation,

when I’m looking for a job.  And this all happened because I went

out of my comfort zone to start a conversation

The Syracuse freshman, Aimon, Gerardo, Mohamadou, Kyra and Sara asked Richard why he chose Syracuse and why he wanted to be an entrepreneur.  The also asked if he ever failed.  “Many times” Richard said. “I’ve been embarrassed a few times but I keep coming back”.

The class ended with our Life Skills networking session with many students exchanging business cards. 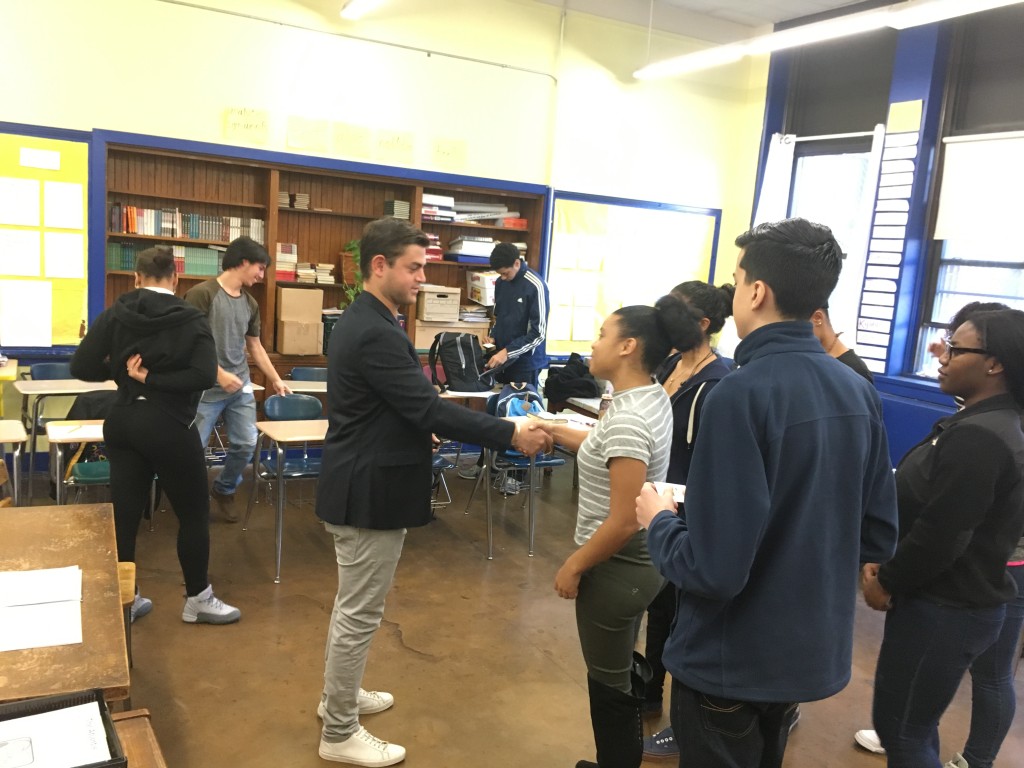 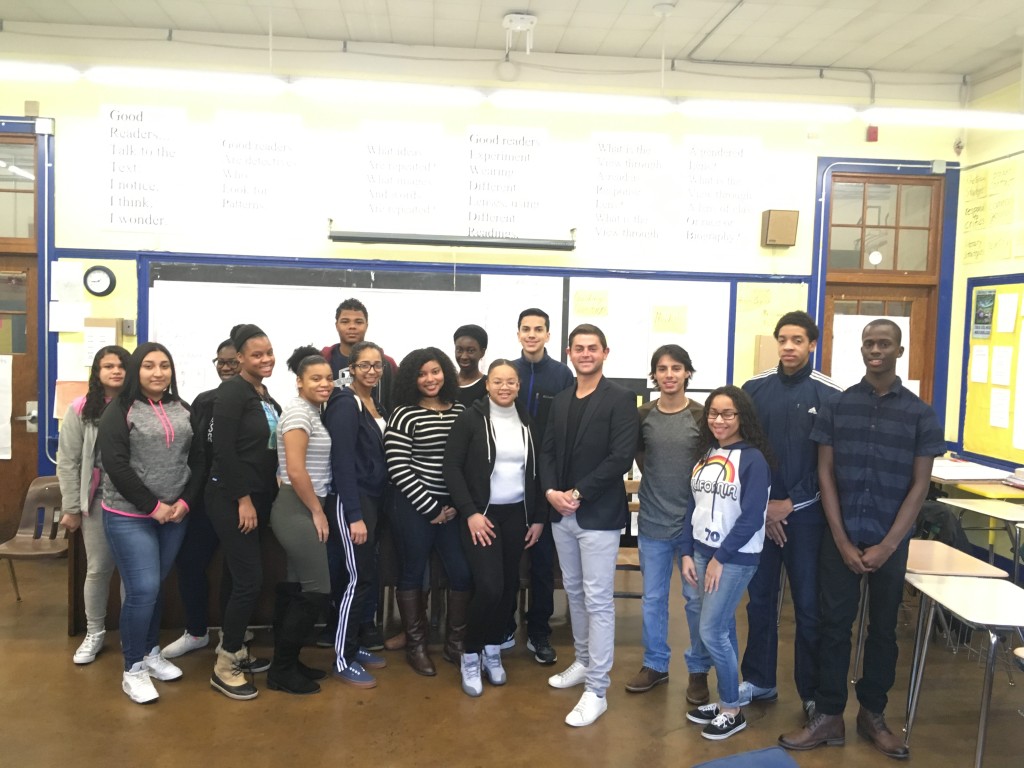 Which one of these students will be the President of a successful company someday?  Maybe even J.P.Morgan Chase!?!!    It could be.