Today’s guest was Nan Quinlan, former Manager of Training and Development at TACO, Inc in Cranston, Rhode Island and presently a consultant on job search strategy and preparations.  TACO is one of the largest, most successful and progressive companies in Rhode Island.

The topic of today’s class was preparing for a successful job interview. 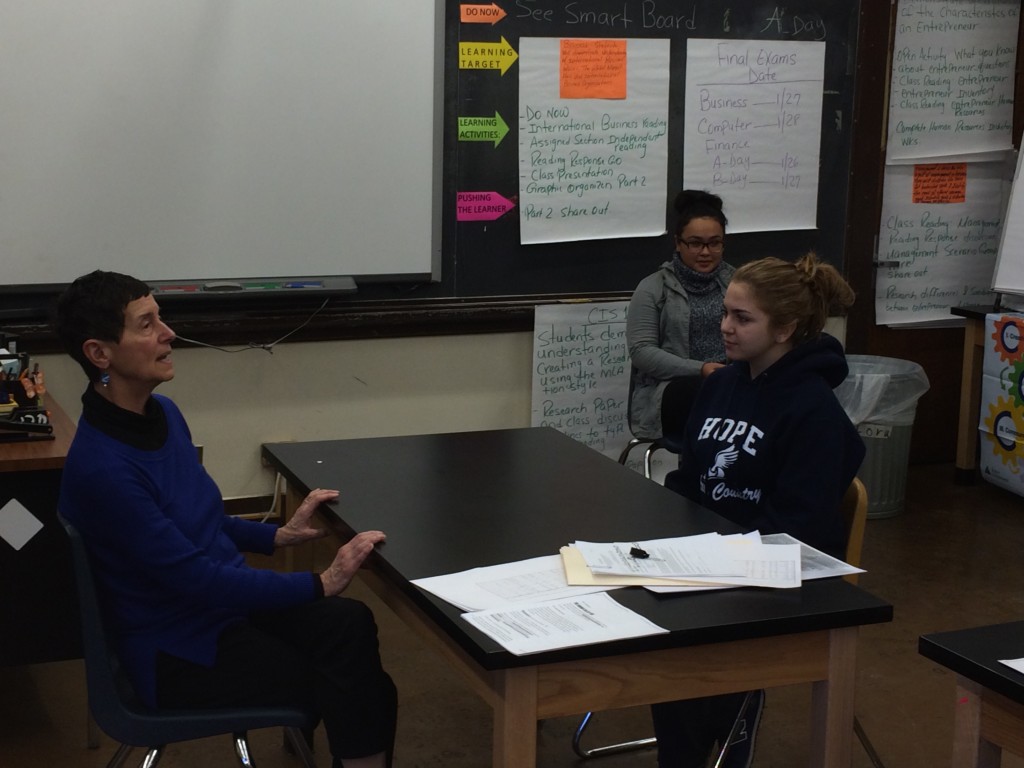 Nan Quinlan (seated left at the table) begins her mock interview of one of our students.    Olimpia Aldana Perez sits in the background playing the company receptionist who escorted Alyssa into Ms Quinlan’s mock office for the interview

After an initial conversation about the fundamentals of a successful job interview, from the job candidate’s arrival at the location of the interview, to the candidate’s encounter with the company’s ‘Director of First Impressions‘ and on to the actual interview, Nan coordinated a

series of role playing interviews with three of the students. 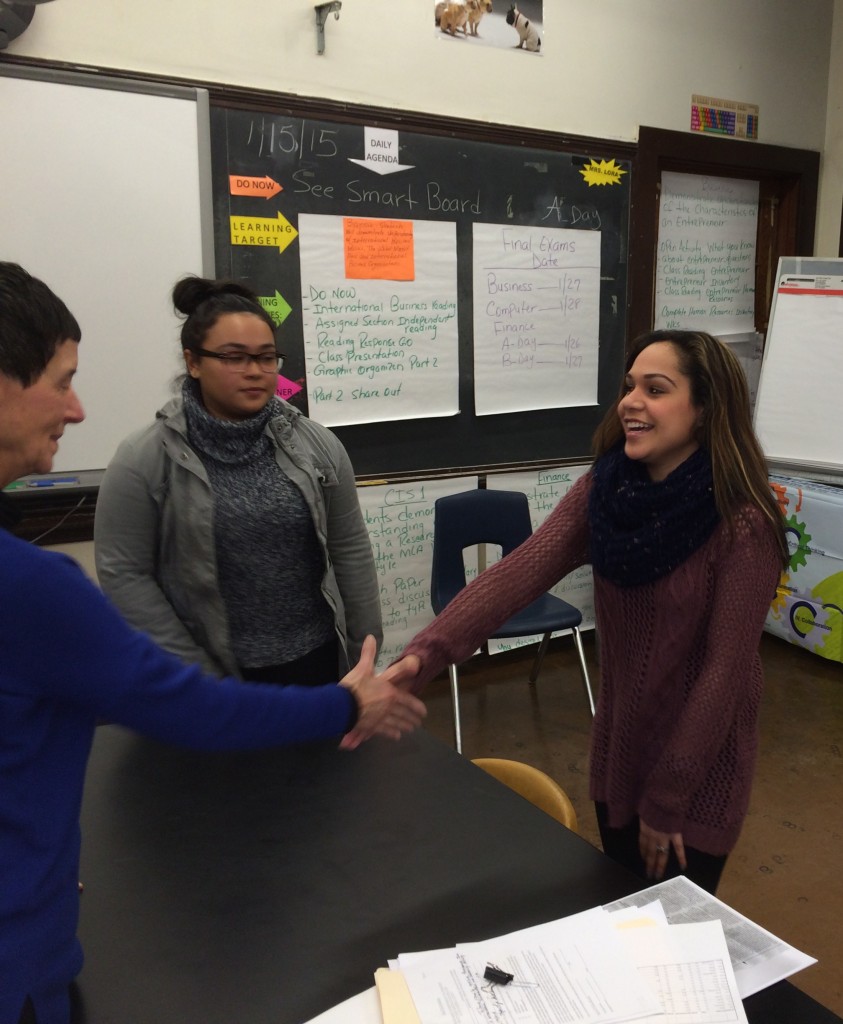 Nan Quinlan (left) greets Jennifer Quenes for her mock interview after having been escorted to Nan’s mock office by Olimpia, the receptionist or, as some company’s indicate, The Director of First Impressions.

The questions and comments between the students and Ms Quinlan at the conclusion of each role play were insightful.     “Where’s the best place to put your hands as you sit during the interview?”…….  “How you sit in your chair during the interview tells the interviewer a lot about you.   If you sit erect, the interviewer perceives you’re very interested in the job.  If you slouch in your chair, the interviewer may perceive you’re not interested.” ……    “Is it appropriate to compliment the interviewer on the earrings or scarf they’re wearing?” ……….. “If you’re being interviewed in the office of an interviewer, observe the surroundings in the room.  If there is a picture you feel connects you to the interviewer, comment.  For instance, ‘oh, I see your picture of Blarney Castle in county Cork, Ireland. I’ve been there too’!”……..   “How do I inform the interviewer of my bi-lingual skills if he or she doesn’t ask me during the interview?”……….   “Be genuine; while it’s important to smile and say ‘thank you’ at the end, make sure you come across as sincere.”……….   “Do your homework; research the web site of the company you are hoping to work for.  Know what the company does and maybe a recent accomplishment of the company or the name of one of their key people like the President”………   “Be polite to the company receptionist;  she may be asked by the person you interview with how you acted as you came into the company offices.”……………

At the conclusion of the role playing exercises, the traditional networking time at the end of the class enabled the students and Ms Quinlan to exchange business cards and add each other to their network. 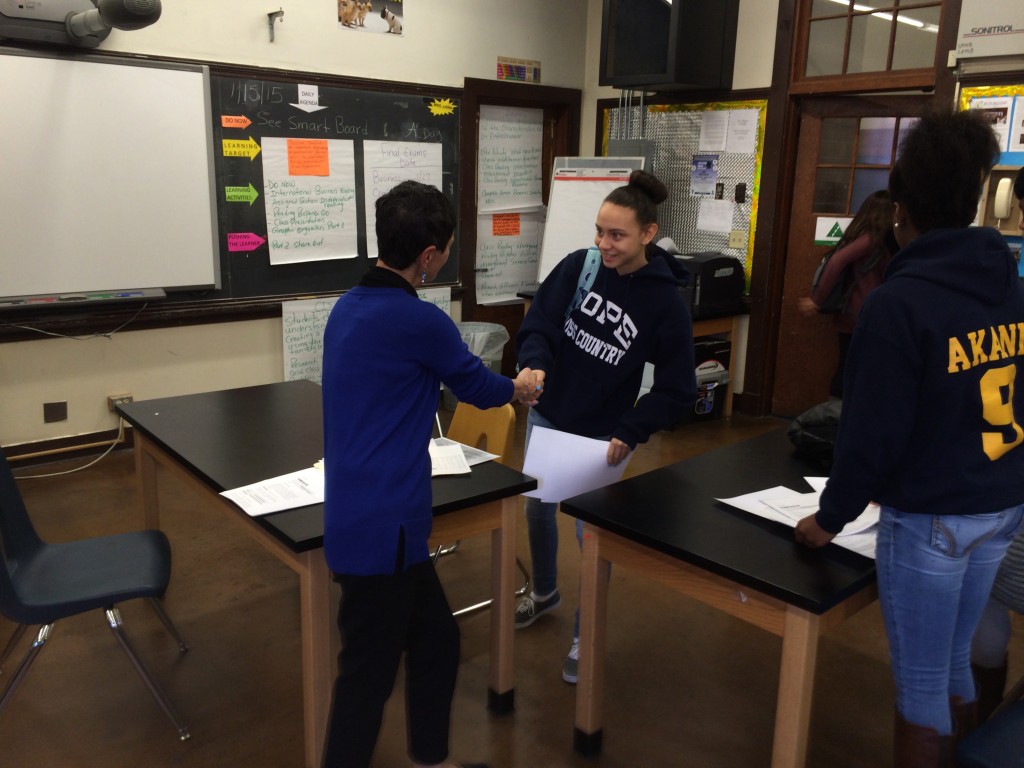 Nan Quinlan has agreed to return to this year’s Life Skills class to conduct a class specifically on writing the perfect resume.