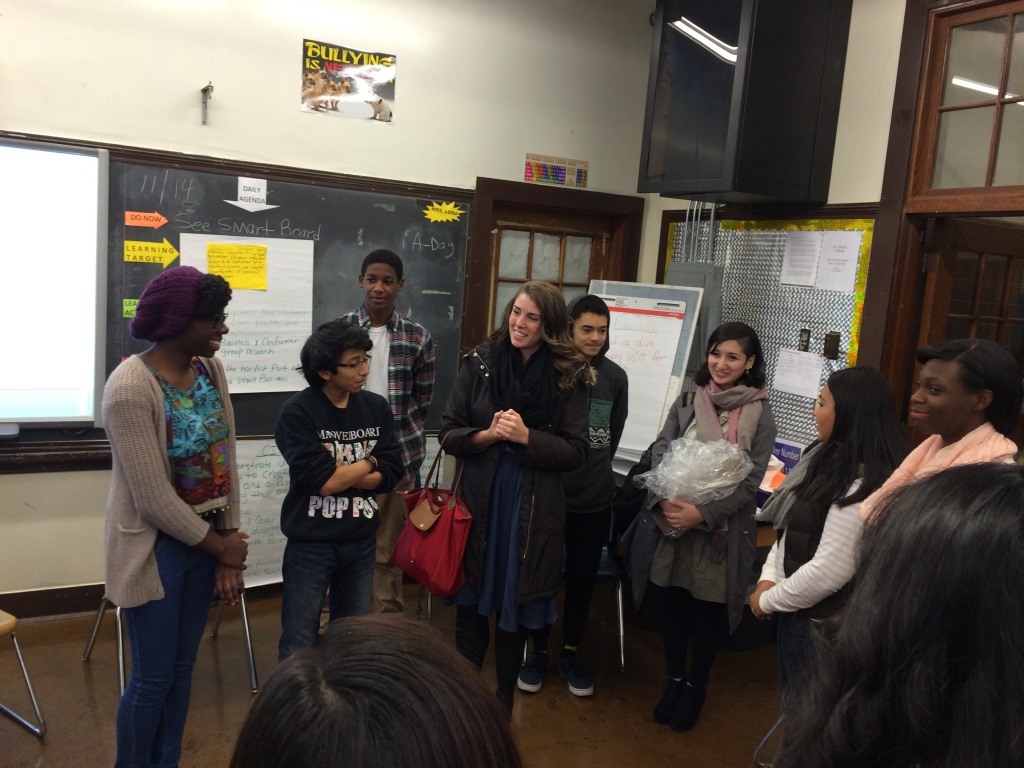 Both women spoke about a life perspective shared.  Lexy and Lusiné both acknowledged being curious and naturally comfortable trying new things, extending themselves out of their comfort zone, to discover and learn, to pursue the ‘What Ifs’ they’ d often dream about.

After Richard introduced Lexy to his classmates, Lexy began her story with a recent experience at Roger Williams University running for Senior Class Vice President.  “I had never considered running for a class office but when a faculty member suggested I run, I thought ‘why not’.  I love organizing things and meeting new people.  I enjoyed the experience and learned a lot“.

Lusiné then shared her story that clearly resonated with many of the students in our ‘Life Skills’ class. “I wasn’t born in America.  I moved to the United States from Russia when I was 9 years old.”  Lusiné spoke about her challenging transition in America, of not speaking English, being in a new school, meeting

new people, trying to fit in.   “Life was different in Providence.  Even buying food was different here than in Russia. The city I came from in Russia had over 3 million people!”  Lusiné continued with “my two sisters and I felt a tremendous responsibility to our parents.  Both my father and mother made great sacrifices leaving Russia to bring us to the United States. We felt we had to work hard in school, get good grades in order to get into a good college“.    Lusiné attended the Rhode School of Design in Providence, one of the most prestigious art and design schools, not only in America, but the world.  She was an Industrial Design major.  “RISD and Industrial Design were perfect for a curious person like me.   I was always thinking of new things to create and new ways of making them. We often worked in groups at RISD because the best innovation and creativity most often comes from collaborating with others.  Even in my job today at Akamai, collaboration is expected.  Everyone must be able to work with others“.  Lusiné then held up a lamp she recently designed and built with a friend and shared several pieces of jewelry she created for family and friends.  She even shared her ‘sketch pad’ with students to view.  Lusiné  has used a ‘sketch pad’ most of her life to capture and work through her creative thoughts and ideas.

The class ended with the usual 5 minute networking time for a one on one encounter between students and guest, to exchange business cards and hopefully add one more successful, professional and quality person to an ever-growing personal network.