Today’s guest was George Ortiz.  George is a successful entrepreneur with experience in many different fields.  He has been the owner of a successful consulting company working for major brands like McDonalds, TWOBOLT and Coca Cola as well as serving in the United States Marines.  He is presently the Founder and President of the Elisha Project, an international community service organization supporting the neediest people in places like Providence, Atlanta and other cities throughout the world.   Our Hope High Life Skills host today was Elijah Akindolie. 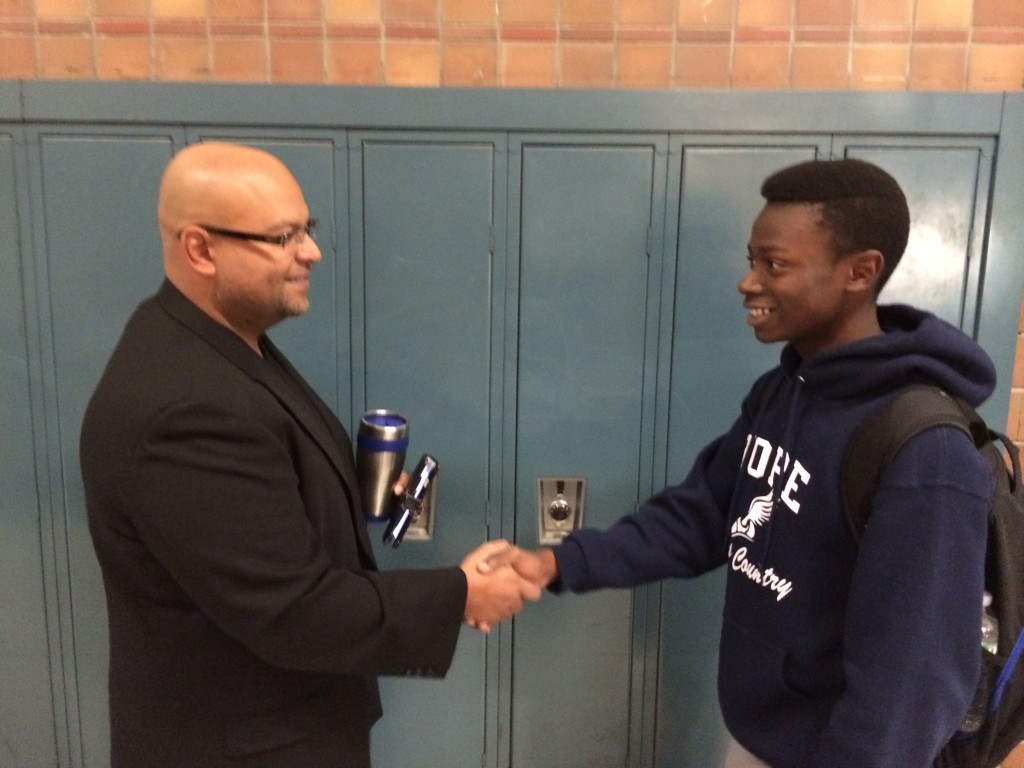 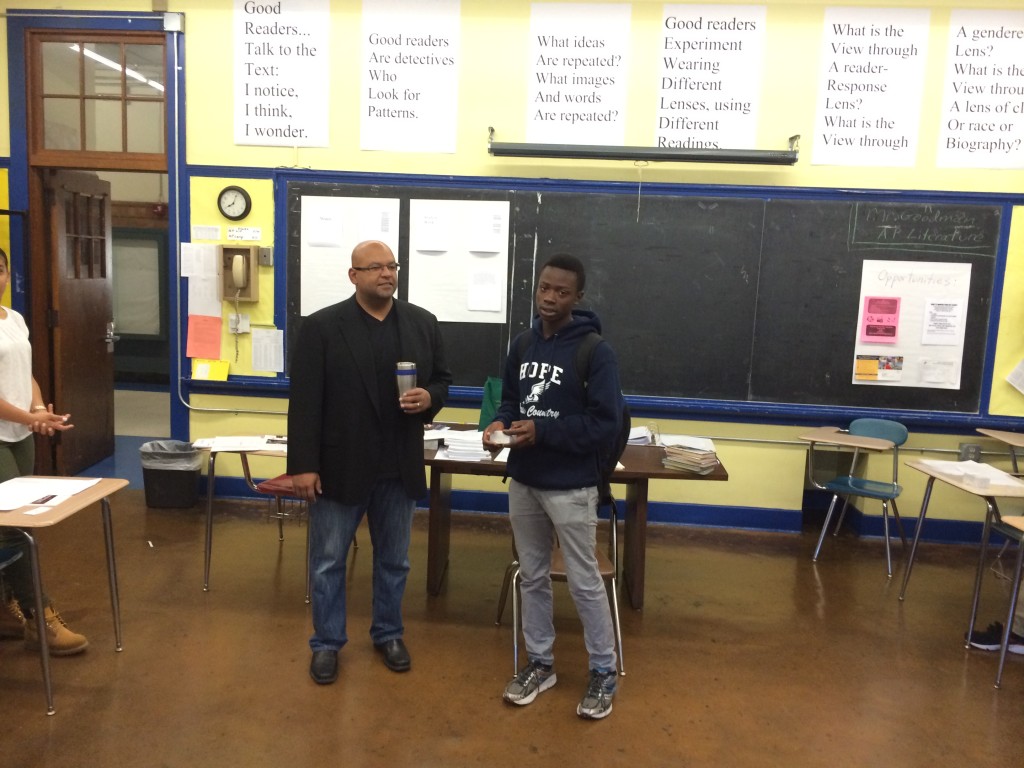 Elijah stepping out of his comfort zone to introduce George Ortiz to his classmates at the beginning of today’s Life Skills class. 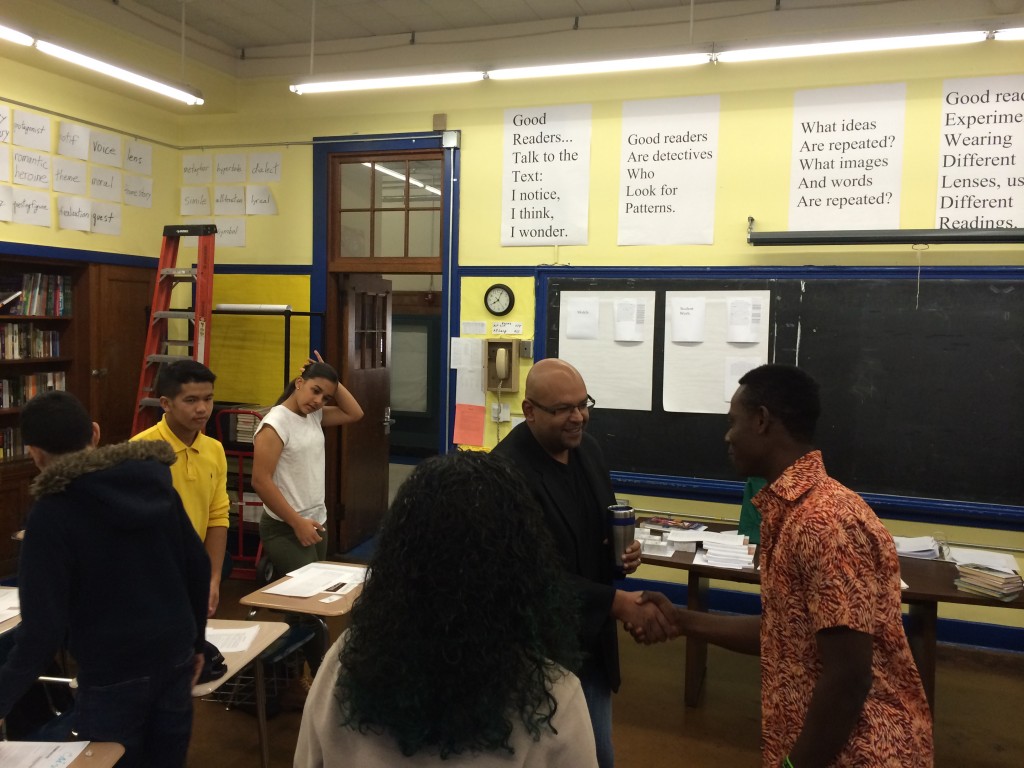 Ayobami Bankole (with hand extended to George Ortiz) greets George with a firm handshake, great eye contact and a smile following Elijah’s introduction of George to the entire Life Skills class. Several other students wait to greet George as well.

George began the class speaking about his upbringing in Brooklyn’s

Bedford–Stuyvesant neighborhood (known as Bed-Stuy) located in the north central part of Brooklyn in New York City.  “Raised mainly by my grandmother.

Father wasn’t around and my mother eventually left our home with an addiction problem. I loved sports;  and, yes Travis (Barbour), I could get rim!!“

George begins his story of success, through failure and fear to courage, persistence and eventual success.

George said.  After stops in Iraq with the United States Marines during the Desert Storm war, George went on to careers in business, personal training, non-profit charitable work with the Elisha Project and his own ministry.  “Throughout my life,

and a personal brand that gave others confidence in me” he added.

I want people to think positively of me which is why I’m always focused on doing the right thing and hanging around with good, smart people.”   George also spoke about ‘failure’.

In fact, mention the names of any successful people, I am certain they failed too.  Steve Jobs.  Jay Z.  Carly Fiorina (2016 presidential candidate). Beyonce.  They’ve all made mistakes and failed.

If you have the courage to find the lesson in any failure or mistake and push on,

get out of your comfort zone to meet smart, successful people, pursue a new internship or job or even take on a leadership position, you too will eventually be successful!  It’s not easy;

you have to work hard,

but, you can be successful.“

Following George’s story and response to student questions, the class networking session began as students exchanged business cards with George thereby adding George Ortiz to their student network and creating opportunities to continue a conversation at a later date. 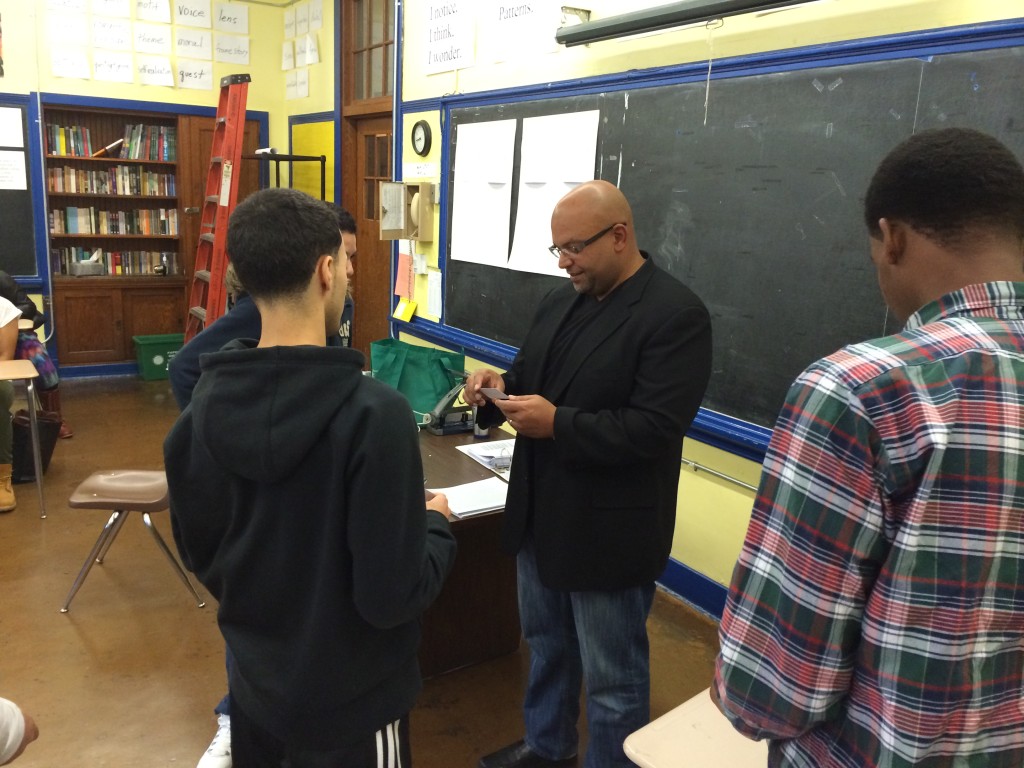 George accepts a business card from Manny Rivas (back to camera in the dark sweatshirt) as Travis Barbour (plaid shirt with back to the camera) waits to give George his business card.